This Batman by-election, if you are a Batman elector you have the option of voting for a “safe climate” candidate, a candidate whose only focus is to ensure a Government-led response to fully reverse global warming as fast as possible and to cool the planet in order to maximise protection of human and non human life, that is, Save the Planet’s candidate Adrian Whitehead.

Vote for Adrian and show your support for a safe climate by putting a number 1 in the box next to his name on the ballot paper, and number the remaining boxes 2-10 using our voting guide.

​We have also provided a critique of each candidate’s party policies to help you decide in what order you vote for these parties or you can simply follow our voting recommendations below.

Save the Planet encourages people to vote for parties and independent candidates with the strongest policy on reversing  global warming and recreating a safer climate.

You can download a slightly expanded version of this document below

Save the Planet has outlined a number of policies it believes are needed to give us the best chance of avoiding catastrophic climate change and saving this planet. Our policies are designed to achieve these four goals:​​
To do this we are focusing on two key short term goals
Our policies are designed to drive our emissions to net negative and begin the process of rapid cooling of the planet. They are to be rolled out at emergency speed over ten years. This would require significant restructuring of a variety of industries, the closure of some and the creation of others.

Communities and workers would be supported to manage this transition and opportunities will be created for firms to repurpose as part of structural adjustment planning.

We must also transition our economy away from dependence on constant material and population growth, human exploitation and high levels of debt, while continuing knowledge growth, and service and technological improvements. If we do this we have a chance of making a truly sustainable future.

Our recommend voting order is below. Save the Planet has ranked the candidates according to the strength of their global warming policy. To cast a valid vote number all boxes 1-10 and use this as a guide.
​
1. Adrian Whitehead
​
2. Miranda Joyce Smith - Animal Justice Party 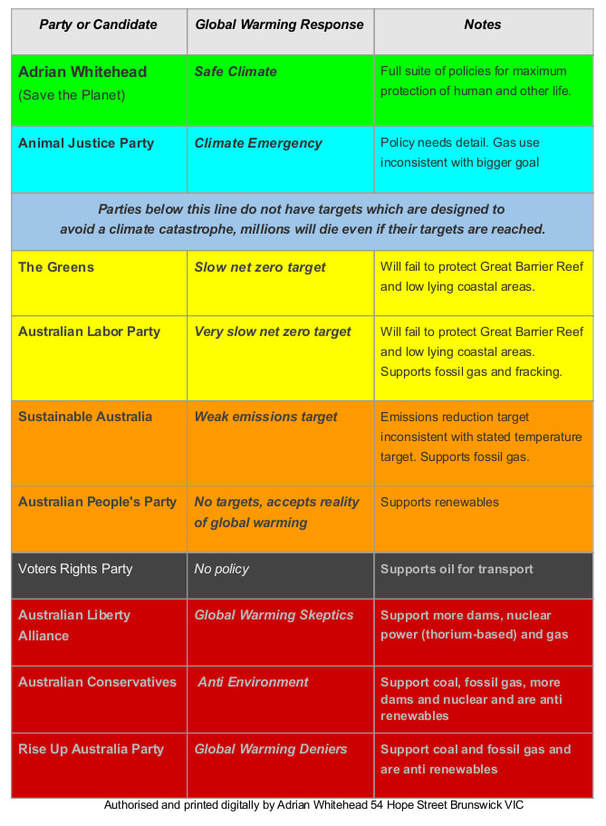 Please note candidate assessments were made using material available between 5-10 March 2018. All referenced links were alive at the time of assessment. The number next to the party name indicates our order of preferences for voting. Make sure you number Adrian Whitehead with a 1 and number all remaining boxes 2-10 in order of your preference.

Parties in this category recognise as necessary the need to create negative emissions at emeergency speed and return to a safe climate.

1. Adrian Whitehead - Save the Planet Party (unregistered) - Full climate emergency policy with focus on maximum protection of human and other life.
See www.voteplanet.net/policies.html for Save the Planets policies on reversing global warming.

Parties in this category recognise we are in a claimte emergency but either lack detail or have inconsistencies that prevent them from being in the Safe Climate category.
​
2. Miranda Joyce Smith - Animal Justice Party - Net Negative emissions. Acknowledges the climate emergency and calls for the reversal of global warming. Policy lacks detail and has an inconsistency around fossil gas.
This party acknowledges we are in a climate emergency, and acknowledges that it is critical to reverse global warming. From their climate policy: “ We must slow, stop and reverse the negative changes to the climate before ‘tipping points’ kick in to accelerate and take the process beyond our control.”
Their policy currently lacks detail, and includes an inconsistency in their comments on fossil gas where their plan for transition is too slow, however their core focus on reducing emissions from the agricultural sector will be critical in reversing global warming and creating a rapid global cooling.
Emissions from the agriculture sector, and animal agriculture in particular, are generally ignored by major political parties and major environment groups despite the critical role the play in global warming. It is important that there is a political party raising this issue.

Parties in this category do not have policies strong enough to prevent a climate catastrophe, save the Great Barrier Reef or prevent the loss of massive areas of coastline.
​
3. Alex Bhathal - The Greens - Net Zero emissions by 2040. Talks about a climate emergency  but policy not strong enough to avoid a climate disaster affecting millions.
The Greens talk about responding to global catastrophic warming’ but their policies fall well short of the moral and ethical response needed to avoid this catastrophe while maximising protection of human and other life.

The major climate goal of the Greens federal organisation can be found in their full 2016 platform, which is a net zero target by 2040.
In their core policies document on global warming, there is also a reference to ‘Net zero or net negative Australian greenhouse gas emissions within a generation’, noting that is generally accepted that ‘a generation’ usually means 25 years.These policy goals have remained unchanged since Save The Planet first ran candidates, despite increasingly clear and more abundant evidence that the impacts of global warming are accelerating beyond previous predictions.

Taking into consideration the year is 2018 their goal of net zero in a generation puts them seven years ahead of Labor’s interpretation of the Paris agreement.
​
The main detail in their response to global warming is similar to other larger parties with three of the four key initiatives listed on their global warming page all focused on energy (90% renewable energy by 2030, community own clean energy, and supporting batteries) with the other key issue focused on saving the Great Barrier Reef, and also reflected in the climate policy which goes by the name of ‘Climate Change And Energy’.,
Like other majors parties the Greens claim they wish to save the Great Barrier Reef but do not acknowledge that we would need a global cooling within a few years to save it and that the Greens’ policies can’t achieve this in time.
Other Greens ‘initiatives’ include: Alex Bhathal spoke strongly at this year’s Batman candidate forum promising to work to defend  native forests and tackle animal agriculture in the context of global warming.

4. Ged Kearney - Australian Labor Party - Net Zero emissions by 2050. Continues to support coal and fossil gas to varying degrees. Policy not strong enough to avoid a climate disaster affecting millions.
Labor has committed to the Paris ‘well below 2 degrees’ target and a goal of net zero emissions economy by 2050, however Save the Planet believes their policies are inadequate to limit global warming to their goal or even save the Great Barrier Reef as they claim to want to do.
Labor seems to understand to some degree the impacts on people and infrastructure from global warming but seems resigned to these events coming to pass rather than trying to prevent them to the maximum extent. From their policy: ‘New infrastructure will need to be built to withstand extreme weather events and additional and strengthened infrastructure will be needed to deal with sea level rises, particularly in built up areas’.
Labor’s other climate related policies include: But they also https://cdn.australianlabor.com.au/documents/ALP_National_Platform.pdf
http://www.laborsclimatechangeactionplan.org.au/?_ga=2.208895249.2073595331.1520908650-1075058030.1520805740

Parties in this category have blatantly weak goals and policy options.​
​
5. Mark  Mcdonald - Sustainable Australia - Weak climate target. Policy has an emphasis on population and sees a role for fossil gas and potentially nuclear.
Sustainable Australian is an evolution of the former Sustainable Population Party, which was renamed on January the 18th 2016. Since then the party has sought to appeal to a boarder base by adopting policy platform focus around the goal of a ‘economically, environmentally and socially sustainable Australia’.
However their policies around environmental sustainability are amateurish at best and include a range of questionable policies.
Their climate policy claims to support limiting warming to 1.5 degrees but has almost no possibility of achieving this with their strongest stated target being an 80% reduction on 2000 level of greenhouse gas emissions by 2050, which is below the current generally accepted response to the Paris targets of net zero by 2050.
The remainder of their climate policy focuses on energy and population, with even their energy policy being weak with a stated goal of achieving ‘a zero-net emissions Australian energy supply.
Other environmental sustainability policies of concern include   Population was identified by Paul Hawken and his Drawdown team as the single most important issue in reducing future emissions (action #6 and #7). Population is generally ignored by major political parties and major environment groups despite the critical role the play in global warming, so it is important that there is a political party focusing on these issues
http://www.votesustainable.org.au/policies
​
6. Tegan Burns - Australian People's Party - Believe in reducing emissions via renewable energy but no other detail.
This party accepts the reality of climate change and sees value in reducing our emissions through supporting renewable energy and reducing our reliance on fossil fuels. They oppose fracking but other than that there is no policy detail.
http://www.australianpeoplesparty.org.au/blog/sustainable-australia/

Parties in this category have no polcies on global warming

7. Teresa Van lieshout - Voters Rights party (unregistered) - The Voters Rights Party has not dealt with the issue of global warming as one of their policies on their website. Pro fossil oil for transport use.
On a video Teresa interestingly seeks to both cap the price of; and at the same time increase the supply of oil for transport.
https://www.voterightsparty.com/
https://www.facebook.com/groups/1437021733231319/

Parties in this category either deniers or are skeptical about the science that global warmign either exists or is human forced.

8. Debbie Robinson - Australian Liberty Alliance - Climate skeptics. Support more dams, nuclear power (thorium based) and fossil gas.
This a party of climate skeptics stating ‘We are neither “believers” nor “deniers” when it comes to climate change’.
They call for clean energy and propose exploring a thorium- based nuclear power system, while also increasing the ‘use of hydro-electrical power for base load power supply, driven by generators in new dams’.
They will cut funding to some renewables while supporting fossil gas as a primary fuel.  They have some other policies which are environmentally positive.
https://www.australianlibertyalliance.org.au/values-and-policies/natural-resources-and-environment.html

9. Kevin Christopher Bailey - Australian Conservatives - Would withdraw Australia from the Paris agreement.  Support coal, fossil gas, more dams and nuclear while being anti renewables.
This party is an anti environmental, while seemingly acknowledging global warming they supporting coal, gas and nuclear while being anti renewables. They support creating more hydro dams.
They will seek to legislate to lock in the use of fossil fuels: ‘will provide legislative certainty for the ongoing use of fossil fuels’.
They would withdraw Paris Climate Accord and claim Australia has no meaningful part to play in reducing global emissions: ‘Even if our emissions were reduced to zero, it would make no perceptible difference to the climate’.
https://www.conservatives.org.au/our_policies

10. Yvonne Gentle - Rise Up Australia Party - Global warming deniers. Supports coal and fossil gas and are anti renewables.
This party is a climate denier party. To quote from their current climate policy:"‘RUAP’s views on Global Warning [sic] have long been known.  It doesn’t exist! So called “scientists” have finally realised that they are unable to convince us that it does, as it is difficult to justify that the planet is getting hotter and hotter, when it is also getting colder and colder.’
They are angry about rising energy prices and believe ‘that the Government is “shafting” us by exporting excessive amounts of our oil causing a substantial shortage of natural gas’ but also put some of the blame on renewables. They have plans to continue coal use.
The only good thing is they don’t mention nuclear power.
http://riseupaustraliaparty.com/our-policies/climate-change/