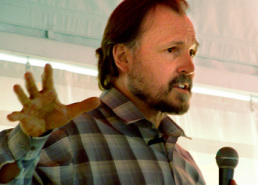 Co-author of Climate Code Red and Manager of RSTI (Research and Strategy for Transition Initiation).  See Philip's Bio. Philip is also the Save the Planet team leader for the development of a Community Mobilisation Plan for the Emergency Restoration of a Safe Climate for the Darebin Municipality (in Melbourne).  Philip has lived in Fairfield in the Batman electorate for 18 years.

Click to find out more about our climate emergency plans campaign.

The Batman campaign's top priorities are:

Within each area we will (resources permitting) have 5 sequential phases of action:

Phase 1    distribute a campaign team recruitment leaflet in the chosen intense areas
Phase 2    distribute an emergency plan leaflet to get people involved in preparing the plan
Phase 3    distribute a leaflet to promote our Save the Planet policies
Phase 4    distribute material to target Liberal, Labor and Green voters separately
Phase 5    Highlighting a vote 1 for "Philip Sutton" on 7 September

Please contact the Batman campaign team if you would like to help with any of this:
batman@voteplanet.net

Our first area of intense engagement is Fairfield 3078, and the next will be Northcote 3070 (including Croxton; Dennis & Westgarth).

Would you like to activate any of these additional areas?

Preferencing by all Save the Planet candidates is done according to an agreed formula based on climate policy with no deals (see the attached preference policy below for more details). 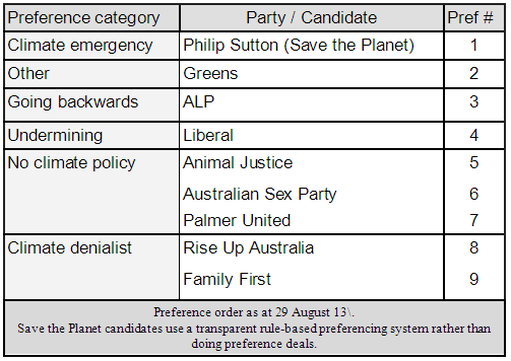