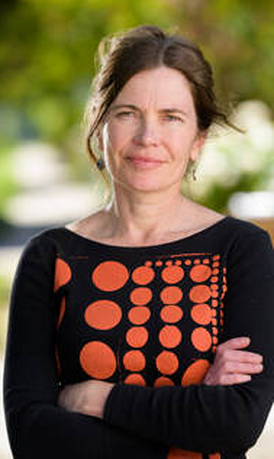 Voting preferences
Vote [1] Bryony Edwards, [2] David Lee (Grn), [3] Adam Cursio (Ind), Stephen Chang (Vic Socialists) and then number remaining boxes. I endorse both Dave and Adam as committed, responsive people and team players.
​
​Election news
​The North East Wards incumbent councillor has been smearing misinformation across the wards in leaflets that say Dave, Adam and me are aligned with councillors who voted not to set aside funds for the purchase of Strathallan Open Space, owned by LaTrobe University. In fact, the land HAS NOT BEEN PUT UP FOR SALE. Why would council set aside rate payer dollars for land that is not for sale? The leaflet seeks to tie existing councillors, plus Adam, Dave and myself to developer interests - which would be laughable if it wasn't so effective in the last days of the election. Please don't fall for these low campaigning tactics.

A long time blogger on Darebin politics, Serena O'Meley, has provided an analysis of candidates in each ward and a how-to-vote for each ward here.

Read North East Ward candidate, Adam Cursio's, summary of some of the dirty business happening this Darebin election.
#PutClimateFirst
My position
I am a long time Darebin resident running in North East Ward for election to council. Outside of work and family, I spend much of my spare time campaigning to restore a safe climate.

Given the threat to our own and our kids’ futures, shouldn’t we be acting like the house is on fire? Councils have many ways to reduce and drawdown greenhouse gases and build our resilience, while also saving money. Every level of government needs to act (see below for more on the climate emergency).

The world is at a crucial point. Greenhouse gas concentrations are still rising but the world has just shown it can go into emergency mode. Let’s swap lockdown, high unemployment and businesses going under for lots of jobs and the chance at a future - at every level of government.

Darebin led the world in 2016 when it became the first government anywhere to formally recognise the climate emergency - over 1,750 governments across 35 countries around the world followed. We can now lead the world again by treating it like an emergency - by acting like the house is on fire. Nobody is coming to save us.

If we get started now and bring others with us as in 2016, we might just save the planet. 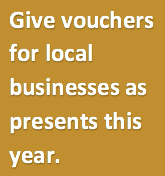 I will work hard: We need to restore a safe climate and Darebin is the place to start. Put climate first!

I'm passionate about models that provide the highest return on investment for councils and the community.

See below for more detail (There is a reward at the end for reading the whole page). 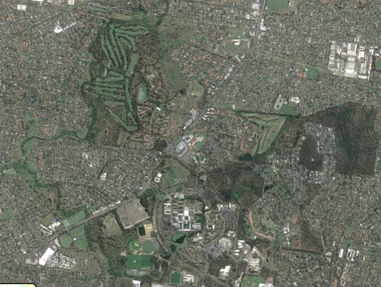 In more detail, I would work to...

Improve our green space and parklands
The North East has an incredible natural heritage that we need to preserve and enhance. We can:
Improve canopy cover. Our urban forests are have been looking sickly through the 2000s. Urban forest include trees on verges, golf courses, Latrobe University and Bundoora Parklands. Trees can significantly reduce local heat plus drawdown (remove) CO2 from the atmosphere. We can help tree growth by adding biochar to the soil - biochar is what we get when we process our hard organic waste properly, rather than dumping it in landfill. Rewilding can help bring back our native birds and wildlife.
Cool and rehydrate our landscapes through effective green space management - Fires were on NE Darebin's doorstep last summer. Rehydrating the landscape cools local communities as well as sequestering carbon. This would include developing wetlands, landscaping parklands, a program for water tanks in flood prone areas. If you create a desert, the rain doesn't come. We can work with those who know how to mitigate fire risk to increase the North's resistance to annual fire threats.


"When you create a desert, the rain doesn't come."

Roads, built environment and services
Improve pedestrian and cycling safety around shops and schools. Walking and riding is far more dangerous than it should be. This also encourages accessing local businesses.
Introduce high environmental standards for new multi-unit dwellings and campaign to make this standard possible for single dwellings.
Convert the council fleet to electric - saving council money while encouraging uptake of electric vehicles, as has been demonstrated by Moreland Council.

"Roads, rates and rubbish are all levers for responding to the climate emergency."
​
Waste
Process organic waste - so much of our organic waste, including sewage, is not processed, creating methane, a very potent greenhouse gas. Processing this waste through biochar and methane converters transforms or captures greenhouse gases and gives us great byproducts of biofuel and a long-lived soil enhancer - biochar. This transition would ultimately save council money.
Deal with our own recycling - Why haven't Australian councils, with the help of state and federal governments, been able to come up with a decent recycling program that deals with the majority of plastic? If it's not actually recyclable then why are we using it?

"We should be turning our solid organic waste into biochar - it's black gold."

Energy
Help commercial enterprises lower their utility bills - switching to renewables saves money for the enterprise but they often need assistance with upfront costs. The Household Fuel Choice in the National Electricity Market report found owners will be between $9,000 – $16,000 better off over 10 years if they establish their new home as all-electric with a 5-kilowatt solar system rather than gas-electric with no solar - even in Victoria.
​Help the community get off gas - We can use the existing Solar Savers and other programs to encourage households and businesses save money immediately by switching to electric heat pumps for heating or cooling and hot water,  and electric stove tops for cooking. methane leaks from gas wells make gas as bad a greenhouse emitter as coal.
Encourage locally owned solar and storage projects - these make our grid more resilient in heatwaves and keeps money in the community.

"Clean energy systems pay for themselves over a few years and then save the user money, Council can help structure financing for the upfront cost."

Community
Stop the pokies. The current Council has done a great job trying to limit the scourge of pokies. Victorians had saved $1billion playing pokes from March to August during the lockdown. Wouldn't it be great if we could stop them from operating again? Pokies belong in casinos, not communities. I'm originally from WA, where clubs and pubs manage fine without any pokies.
Safety though improved street lighting. Switching remaining streetlights to LED, will reduce emissions and save council money.
Introduce Citizens' Assemblies. Citizens' Assemblies are have been tested in a number of UK councils to allow community decision making on issues considered contentious. There is a time commitment for the randomly selected volunteers in the assembly, as they are educated by subject matter experts on issues affecting the decision making.
Support local sports clubs, which have taken a big hit during lockdown.
A library for the North East. Many people will continue 'working from home' post COVID. The library could be a hub to support this.
Arts - facilitate the allocation of available space for pop-up galleries and performances. Grants for place based enhancements. Set up several open-air performance spaces that are active each Saturday/Sunday and pay local artists to perform there.
​
"Citizens Assemblies bring the community voice into council on the big issues.

Small business
Support local businesses. Small businesses are the lifeblood of our communities and we must look at ways to help them thrive, especially at this incredibly tough time. This could be achieved in part through Council campaigns asking people to buy local; a means for businesses to advertise locally, and through a grants programs and by supporting infrastructure around these businesses. Retail businesses need to be approved quickly and efficiently if there are no issues.

"Small businesses are the lifeblood of our communities."

​Food
Help build a resilient community food program. Local food resilience will be increasingly important under climate impacts and council can help facilitate local groups to provide this resilience. There are spaces across Darebin where local food growing can flourish and create viable jobs locally. For example, productive aquaponics systems in empty industrial carparks.
Council and the Climate Emergency
If you think tagging the word ‘emergency’ with ‘climate’ is alarmist then you haven’t understood the concept of ‘Hothouse Earth’. Positive feedback loops are propelling us into an unliveable future. Even if participating nations, such as Australia, were trying to meet their Paris commitments, this may not be enough to avoid Hothouse Earth. We would not get on a plane with a middling chance of avoiding catastrophe so why are we taking these chances with the Earth?

Darebin led the world in 2016 when the new council formally acknowledged we are in a climate emergency. Over 1700 governments across 35 countries have followed (see the full list here). This includes all the major cities (New York, London, Paris, etc) as well as state and federal governments, including South Australia, and includes most major Australian cities including Melbourne.

However, few if any of these governments that have declared a climate emergency have then gone on to ‘act like the house is on fire’, which is what the world needs to do to avoid the worst impacts of climate change. None are willing to go out on a limb, to make the first move, to be the first dancer on the floor. However, as with the declarations, others will be willing to follow the one that makes the first move.

​"The world has left it too long for baby steps. Nobody is coming to save us. Darebin can lead the world again."

But more importantly, the council is building the communities resilience to inevitable climate impacts - fire, drought, food shortages, blackouts and brownouts, heatwaves. Beyond resilience building, council can also make a difference by educating the community and bringing other councils and higher levels of government along with them, and create economies of scale for initiatives rolled out. As during, most communications from government are framed by the emergency.

Please read my blog about on how councils burying their heads in the sand are incurring higher costs and liability.
​
Back in the day (2018) when the Council Climate Emergency movement hadn't quite taken off. It's a bit dated (check out my glasses) but the nuts and bolts are there. Now we need a council to act like the house is on fire!! Don't be afraid - it's only one minute and forty eight seconds.
Donate to Bryony's campaign
My flyer 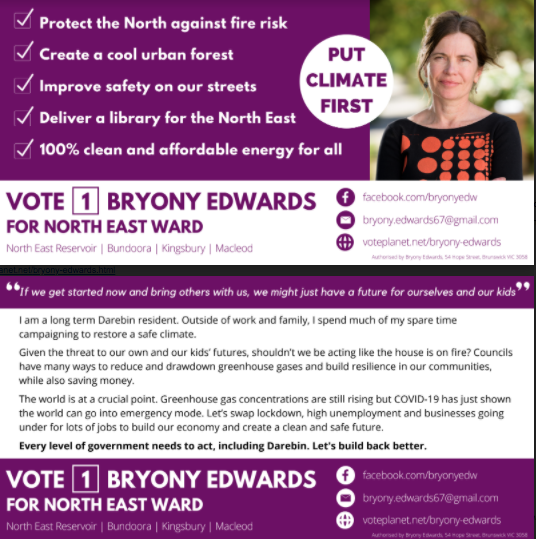 I acknowledge Wurundjeri Willam people as the traditional custodians of the Darebin area. I pay my respect to Elders past and present and emerging across Victoria and Australia, and to the ongoing living culture of Aboriginal people everywhere.
And now the REWARD for making it to the end of my page...a dachshund and a tortoise playing soccer!