Why support the Save the Planet party?

We are the only party running as its number one issue, an emergency speed transition to global net negative emissions.

While the other parties are out chasing votes, doing the bidding of their financial backers, or working on some other policy agenda, Save the Planet is 100% focused on delivering the needed solutions that will give us the best chance of avoiding a climate catastrophe and survival into the future. There is no room for comprise on global warming. 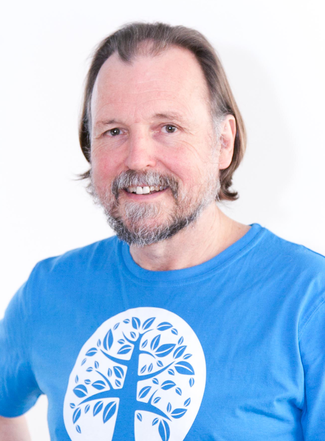 Philip Sutton is Save the Planet's Candidate for Batman. In 2003 Philip Sutton, was one of the first people in Australia (along with Adrian Whitehead and Matthew Wright) to recognise the need to reverse global warming and start campaigning publicly for it .
Since then Philip has constantly led the movement on global warming though a range of initiatives and research projects including the publication of key work Climate Code Red with co-author by David Spratt, and the Beakthrough project.
Philip Sutton for Batman - Bio
Philip has been a Fairfield resident for 20 years. He is a leader in the climate movement and a sustainability strategist. In his early career Philip developed Victoria's Flora and Fauna Guarantee Act, worked on State strategies for energy, conservation and the timber industry and developed the campaign that led to nuclear power being banned in Victoria. Since 2006 Philip has campaigned for emergency action to restore a safe climate, co-authoring the seminal work 'Climate Code Read', supporting key organisation such as Beyond Zero Emissions and is currently supporting the 'Break Through' and Climate Mobilisation' campaigns while running his own climate think tank RSTI (Research and Strategy for Transition Initiation).

HOW TO VOTE PHILIP SUTTON IN BATMAN 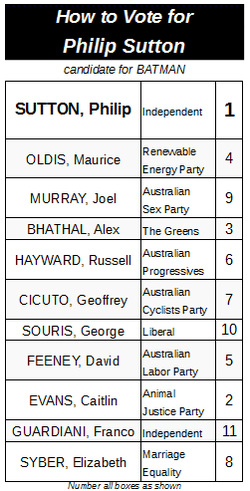 Down load a copy of our how to vote card.

Download File
VOTING FOR A SAFE CLIMATE THIS ELECTION
Save the Planet has ranked the top six to inform your decision on how to vote for a "Safe Climate" this election. The party with the strongest climate policy other than Save the Planet is the Animal Justice Party. Click here for to see the rankings.

Help the CAMPAIGN to restore a safe climate

LEAFLETING - We are now leafleting the federal seat of Batman. Our Batman campaign also supports our Darebin Council campaign to win our first elected seat. If you would like to help out, please let us know.

DOOR KNOCKING – Over the next few weekends we will be door knocking homes in the Batman electorate talking about global warming and recreating a "safe climate".

POSTERS – Do you have access to a property or shop in the Batman Electorate? Would you like a poster of Philip Sutton to put up?

ELECTION DAY – If you are free on election day please help us hand out How to Vote Cards that include information about the climate emergency and restoring a safe climate.

Contact Adrian Whitehead if you wish to be involved in your local Batman Campaign.