Save the Planet is not running Senate candidates at this election.

Save the Planet encourages people to vote for parties and independent candidates with the strongest policy on reversing  global warming.

​We have provided a critique of various parties’ policies to help you decide in what order you vote for these parties, and which includes a list of the top six parties.

Remember if voting for the House of Representatives you need to number all of the boxes in order of your preference in order to cast a valid vote.

Parties in this category recognise as necessary the need to create negative emissions and return to a safe climate.

Their lead Senate Candidate understands the threat of global warming and the solutions that need to be implemented to return to a safe climate.

“This is nothing short of a global emergency requiring immediate and substantial action. We must slow, stop and reverse the negative changes to the climate before ‘tipping points’ kick in to accelerate and take the process beyond our control.”

Parties in this category do not have policies strong enough to prevent a climate catastrophe, save the Great Barrier Reef or prevent the loss of massive areas of coastline.

2. Socialist Alliance:
Socialist Alliance has comprehensive climate polices supporting a range of initiatives from 100% renewables, options for carbon draw down, public transport, urban design, energy efficiency role out, a just transition for workers, to helping all members of our society adapt to future warming.

Socialist Alliance have however removed a negative emissions goal and pre-industrial targets from their 2016 policy and instead have adopted a zero emissions goal.

“To avoid triggering dangerous tipping points, it is vital that we move to zero emissions as fast as possible.”

3. The Greens:
The Greens have a strong set of climate-related polices including a large focus on renewable energy but only argues  for 90% renewable energy by 2030. Other policies include protecting native forests, energy efficiency, supporting transitioning workers and support for high speed rail.

Disappointingly the Greens have no set date to achieve 100% renewable electricity or negative emissions.

“By 2030 all of Australia’s electricity will come from renewable sources.”
“Ensure that by 2050 at the latest, Australia achieves net zero greenhouse gas emissions”

5. Labor:
Labor supports a zero pollution target by 2050, a renewable energy target of 50% by 2030, energy efficiency and a range of other supporting policies.

“Labor accepts the science that limiting global warming to well below two degrees Celsius is necessary to avert dangerous climate change. That commitment requires Australia to be a net zero pollution economy by the middle of the century.”

Parties in this category have blatantly weak goals and policy options and have an extremely poor understand global warming.​ We are disappointed that we had to include a party in this category to able to recommend a top six list.

DO NOT VOTE FOR THESE PARTIEs

Don't Vote for Climate Deniers and Sceptics
These parties don't believe global warming is real or question the science on it:
The Worst Party on Global Warming is Pauline Hanson's One Nation
Read the quotes from her party's energy policy and make up your own mind.

"Paying a carbon tax or an Emissions Trading Scheme (ETS) is not going to wave a magic wand and stop nature changing the climate change."

"Climate change should not be about making money for a lot of people and giving scientists money."

"Review the Bureau of Meteorology to ensure independence and accountability for weather and climate records including public justification of persistent upward adjustments to historical climate records."

"Teaching of climate science will begin in secondary school and will be based on the scientific method of scepticism until proven."

" Funding rom the U.N. in particular will be probed for an agenda not consistent for what is best for
Australians."

Voting for Philip Sutton in Batman

Save the Planet is only running one candidate this election, Philip Sutton in the Victorian Seat of Batman. To vote for Philip please use the below "How to Vote" card as guide. We have ranked the parties according to the strength of their global warming policy. 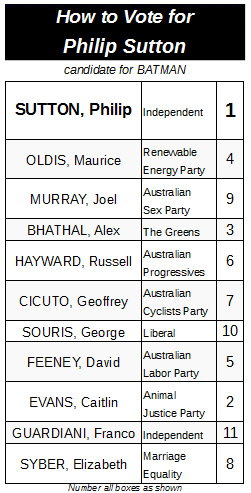